Active since 1924 in construction as contrators and concrete manufacturers, we feel free to introduce our new product to you.

Everyone among us knows the ruthless attacks on our fellow man, that happen with heavy trucks, and are paired with different casualties and heavily injured, often for the rest of their lives. Events and organizers, all groups of people who are in charge of everyone's safety are aware of the concern. 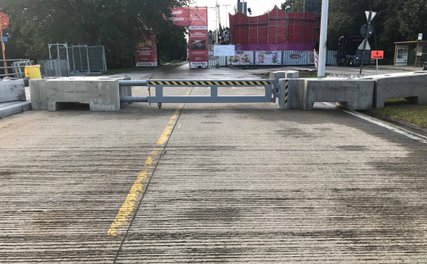 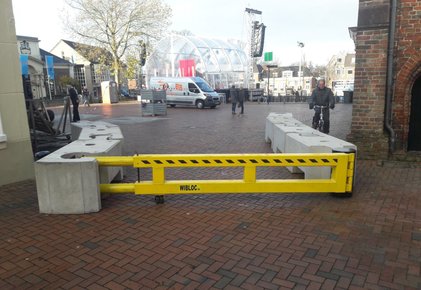 Luckily, all authorities that are responsible for "safety", have responded to try to exclude this phenomenon. In many cases concrete blocks weighing one to two tonnes are used to counteract the drive through or drive in of heavy traffic. With almost 100 years of experience in concrete and transport, we know all too well that loosely placed concrete blocks, can be pushed with a customized terrain vehicle... …

We searched and found an appropriate solution. We are delighted to present to you the advantages of the new, specifically designed concrete block "Wibloc".

The profile of every block , of the system, is developed in such a way that all of the blocks placed in the row help each other to withstand an eventual impact. The measurements are 216 cm L x 78 cm W x 70 cm H. The blocks are connected to each other like a puzzle. Each cement weighs 1720 kg en the traveled distance from axle to axle amounts to 165 cm.

For example, to close off a street of 10 m you will need 5 pieces. Click for examples.

During an impact from a heavy truck all blocks will be under pressure. The tolerance, that is required from the placement, is the only slack there is, which will cause the "chain" to tighten.  A loop of a few meters, that's it. It is impossible to carry more than 10 tonnes of blocks... the weight of only five blocks for example. Other advantages of the Wibloc will also be listed here once again:

1. A block weighing 1720 kg may seem heavy, but in any case mass and weight is a must. Still this is a significant weight for a light forklift or smaller truck, usually owned by a municipality or city service.

2. The unique linking system makes a chain of the blocks with only one layer! It is not necessary to have a second or third layer to get stiffness in the wall. A heavy armor will catch the sideways tension.

3. With the Wibloc we do not need to make a high concrete

wall that is not inviting for any event. However, the possibility

exists to make a wall with the system, for example 2.10 m high.

4. Our 70 cm high wall is also not an obstacle for fleeing

people, for example with an explosion, fire or heavy storm...

panic, everyone can easily get over it.

5. On the bottom of the block there is an indentation of 80 cm

wide across the entire thickness of the block.

This indentation has several functions:

6. Of course  accessibility for emergency services has also been thought of. A fence, made from square and round pipes of a wide diameter can be adjusted instantly to offer an opening of 3 to 3.5 meters for the ambulance or firetruck. The system "clicks" into each other the same way as the blocks itself.

7. The placement of the blocks can also be done with a simple mechanical tin clamp, with belts or with chains.

8. In the middle of the block a vertical pipe has been provided (diameter 160 mm) in which a flagpole can be placed, given that this can be tightened by using a wooden wedge. If wanted, even a Heras barrier can be placed inside. (Alternately, a flagpole or a steel pipe, provided with two plug in pipes (diameter 50 mm) in and on a eccentric spinning disk, where a slack of at least 20 cm is possible.)

9. Transportation has also been thought of.

With this description I hope to have painted a clear image of a new product that was specifically designed to combat a regrettable phenomenon of the 21st century.... 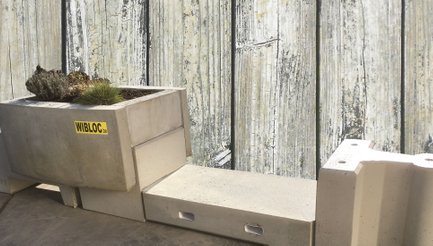